Last year I intended to do a rather ambitious 365 project. I managed to get to March but then it became a chore and as this is my hobby it seemed rather silly to carry on with something that I was not enjoying, consequently it fizzled out. However I do think its a good idea in principle so this year I have decided to try a less ambitious Project 52, one a week. This really should not be a problem, except that it is now February(!) so I will start by looking back over the first month and selecting from what I have already taken. I will attempt to use different images to the ones in my main blog pages. 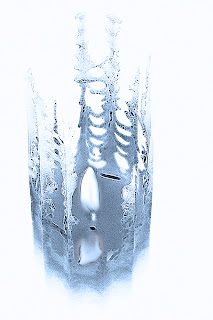 I do enjoy candles at Christmas and always have a number in the lounge and dining room. This year we purchased a novel candle which creates interesting patterns as it burns. 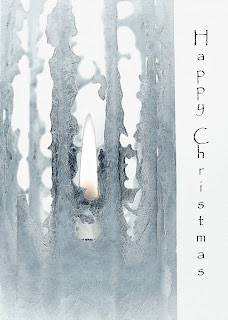 When I came to take down the decorations I realised that the shapes it had created may provide a good starting point for Christmas cards next year.
This is one idea with the wording.

Now how is that for being organised?

Christmas presents this year included an Infra Red filter. This was the first opportunity I had to explore its possibilities.


This was at one of my favourite spots, Ashridge Forest. I spent a short while there, it was very sunny but very cold, and produced a mass of very mediocre to rubbish pics. I have since discussed this with somebody at my camera club who has given me one or two ideas to try next time.

Anyway I did discover that the brighter the subject the better and that some interesting effects can be obtained when you get it right!

This image was a tight crop, simply because I liked the shape the trees produced like this and then I added a filter to give some movement to the trees.

Not perfect but I quite liked the effect and its a good starting place for more infra red experiments. 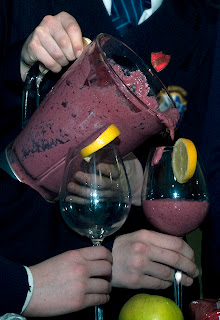 By now I am back at work, this means less time to 'play'. However I have been asked to produce a book of school activities which does mean I can legitimately take my camera and take photographs during the school day, just for half an hour or so, that's for those who may read this and who already think that teachers do nothing anyway ;) You know who you are!!!

This is actually a French lesson. The pupils had to perform a cookery show, with all instructions in French, the results were rather good...and the French wasn't bad either!

....and along a similar theme as above, one from our breakfast club. 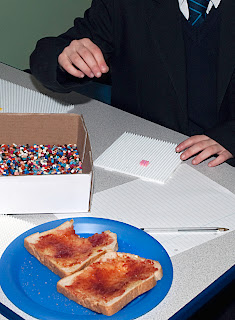 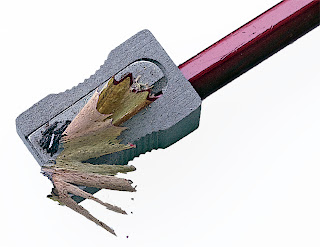 The upcoming wood and /or steel competition at my camera club was testing my igenuity! I suspect there will be an abundance of textured bark and gritty machinary and I was determined to try something different. So I came up with this...(!!!)... I know not very original but it was the best I could do, at least it has wood AND steel in it. Anyway, despite lack of ingenuity, I was rather pleased with the outcome. How it does in the competition remains to be seen!

I am afraid this is a bit of a cheat because I haven't had my camera out this week, so this weeks pic is actaully one I took last week in my quest for a different entry in the competition. Inspiration came from the shadow pics I took of the wine glass  over Christmas, see main blog entries. In my defence it has been edited today and is now ready to be entered into the competition. How it does, as always, depends on whether the judge likes this type of pic. 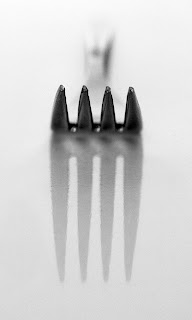 Week Seven - February 12th﻿
For one reason or another this has been rather a frantic week, consequently there has been no photography and so I have been looking at some of my old stuff, trying to see if anything is worth saving. I came across this image taken in the Lake District about 18 months ago. I rather liked the low aspect of this and the sense of foreboding that the dark waters give. An unusual image for me as I am no landscape photographer. 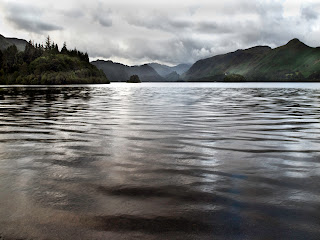 I realise that last weeks effort was nothing to write home about and I have since received some very much appreciated advice and tips re landscape photography, something I will return to in the coming months.
This week I decided to return to my comfort zone and include a pic which was successful in the wood and steel competition I mentioned a few weeks back. I was very lucky to get first place with the sharpener pic and second place with this image which was taken whilst on holiday in Iceland. 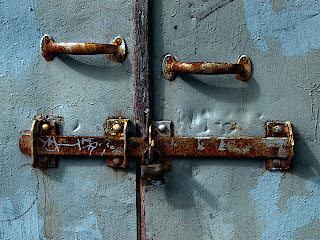 I enjoy finding pictures in the detail of larger objects. This was on a garage door and attracted me because of the texture and the paintwork, also as it was midday, the sun created strong shadows which I felt added to the image.

Week Nine - 27th February﻿
You can read more detail about my antics in Brighton this week on my main blog post. My image this week had to come from that trip...but which to choose. With several hundred to choose from it should not be difficult, however as I am told (!), less is more and the more pics I have the harder it can be to see the wood for the trees, perhaps I should try and be more selective in future when I am out and about.
Anyway back to my choice. I decided to use an image which took advantage of some in camera wizardry to produce a pin hole effect. I must admit I rarely use this facility on my camera but sometimes it can produce some interesting effects. I find this quite dramatic and enjoy the link between the powerful waves in the foreground and the skeletal remains of the West Pier in the background. The ravages of the sea have hastened its demise since the fire in 2003. 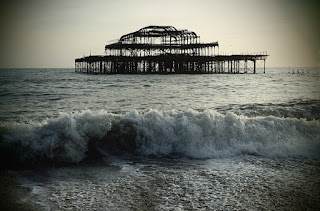