A welcome short break in Brighton gave me the perfect opportunity to do some serious photography. I realised that I was exploring a city which had potential, but also one which had been 'done' many times before. So the question was 'How could I make it my own?'

The first thing I did on arrival was to explore the beach front between the two piers. In 2003 the West Pier was destroyed by fire, since then the elements have done their worse leaving a skeletal structure in the sea.

This image was taken from the West Pier looking towards Brighton Pier which is still very much a working Pier.

In order to get both Piers in I used 8mm Fish Eye and straightened the image in Photoshop. 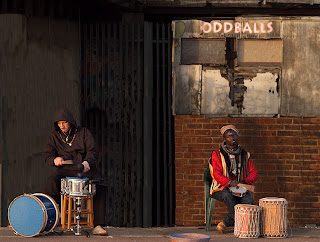 Walking along the beachfront, even in February, can produce photographs of some interesting characters. Street photography is not a forte of mine, I am just not bold enough to go up to people and push my camera into their faces, although afterwards I always wish I had been! Anyway these two were sitting there playing some interesting African drumming music, it really was very pleasant, who could resist this one? 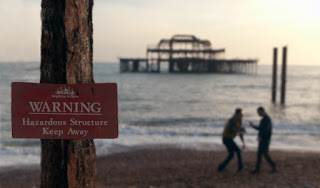 Continuing my quest for something different I thought there might be a picture to be had using the warning signs in front of the West Pier.
I took several but I enjoy the composition of this one which I call Keep Away.
Differential focus keeps the background sufficiently out of focus to maintain the point of the picture to the fore. 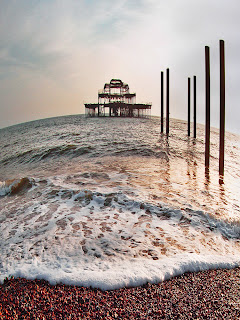 As the sun began to set I returned to the Fish Eye in an attempt to produce something different. I have seen many pictures of the West Pier but I don't recall any with a Fish Eye lens, I am sure there are some out there but I enjoyed the composition and impact that this has with the curve of the earth greatly exaggerated and the incoming waves.

My final selection from the first day is a sunset picture with starlings swarming over the pier at dusk. What an amazing natural phenomenon, which I understand is called murmuration. I have seen it on the TV and had not known before Thursday evening that this happens each evening at dusk, during winter months in Brighton. What a treat and a lovely way to end the day.

On the second day I awoke early with the intention of getting some sunrise pictures to go with the sunset images from the evening before, unfortunately on looking out of the window all I saw was fog and/or mist. On second thoughts I realised that this gave me further opportunities to try something I had not tried before, misty pics, so off I went.

On walking along the seafront there were few people out, one or two dog walkers and a tramp or two rousing themselves, but then it was only 7.00am.

Then, next to Brighton Pier, I saw this bunch from the local swimming club. I have no idea why they would do this, but it would have to have serious health benefits to make me strip off and go in the sea at 7.00am in February, or indeed at any time!!!

One for fun, taken a few minutes after the swimmers, called My Patch. Even the bird seems surprised at the men's antics! 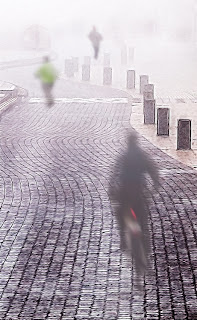 I felt cold just watching them and so made my way along the seafront towards the West Pier. By this time more people were out and about, enjoying the exercising possibilities or simply getting to work.

It was still very foggy and I struggled to photograph the scene effectively.
In order to emphasise the foreground and give a greater sense of fogginess in the distance I added a filter, which darkened the cobbles whilst lightening the top of the image as the fog became more dense. This has created a more graphic image which I rather like, not sure if it will win any prizes but I enjoy the atmosphere and like the image, so that is all that really matters.

And so back to the West Pier, still using the Fish Eye but a very different feel. At this point I was feeling rather bruised as I had fallen flat my back as I walked down the concrete walkway, it had some pebbles deliberately placed to catch unwary, lady photographers!!! No I am not getting paranoid, really, I'm not!!! Fortunately nobody was there to view my gymnastics and  no harm was done, apart from some rather large and very colourful bruises.

And finally one taken with no special effects or photoshopping, apart from the usual sharpening.
This is a colour image however there was no colour anywhere to be seen, I was particularly pleased with the detail, which is just apparent through the mist. 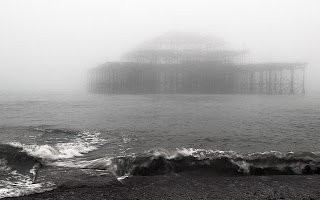 After all the exertion it was a brisk walk back to the hotel for breakfast and several cups of strong, warming coffee. After breakfast I did explore the other side of town and visited The Lanes, but on this occasion it did not produce anything of note. However I did stumble across the Brighton Pavilion and took this image, again looking for something different, I suspect this has been done many times but I am a bit of a sucker for a reflection. 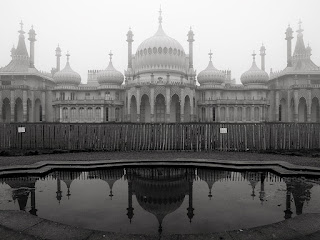 It was a very enjoyable break and although I doubt if the pictures will be award winners or get themselves into any exhibitions I enjoy them and am pleased with the variety I managed to capture in under 24hrs.
I will return to Brighton....summer hols Mr W.?
Posted by Shirley 3 comments: 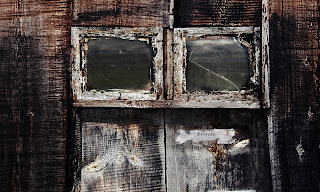 I decided to include this image today because this has been one of those pictures which required considerable PP work to get it as I wanted it. The minute I saw this on a farm in Iceland I knew what I wanted to do. For me the windows looked like eyes and the sign indicated how much of our thoughts and feelings we often keep as private and out of bounds to others. A bit heavy maybe but a good starting point to create an image with impact, my success or otherwise will be judged by others.
There was a considerable amount of dodging and burning to create the right amount of contrast whilst keeping detail in the shadows and then poster edges were added to emphasise the texture of the wood grain.
Posted by Shirley No comments:

The observant amongst you will have spotted a new standalone page tab to the left of my blog called Project 52. This is my attempt at uploading and talking about a photo a week, lasting year. As explained in the introduction its a bit of a cheat for January as I have had to do it in retrospect, but from now on I will attempt to keep up to date with it.
I hope you enjoy.
Posted by Shirley No comments: