Continuing my experiments with my Infra Red camera I went for a walk in a different part of Ashridge, to a spot where I knew there was a building in the forest in an attempt to try a new, for me, take on the IR image. 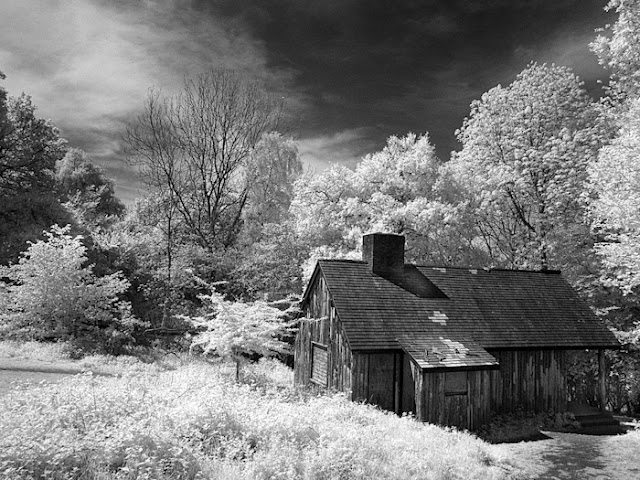 Of course this weekend has all been about The Royal Wedding. Although we were unable to attend the party held in our street, I managed to snap a few left over decorations.

I have not taken any pics this week but I am determined to keep up my Project 52, so I went into the garden with the IR camera to see how different plants look in IR 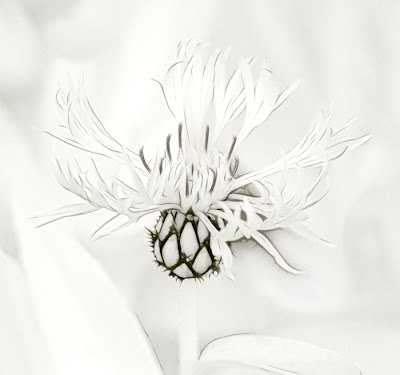 This is a large blue flower which grows everywhere and really is a weed, I have been unable to find a name for it! I found out that plants can look good provided some part of it has a dark or black colour. In this case the bud. The added advantage of this is that the shapes on the bud are particularly interesting.
As the background and the petals all came out white I needed to find a way of differentiating so I used a small amount of Fractalius to pic out the black and the edges. I like the idea of this image and hope to return to try some alternative flowers and treatments.
Week Twenty - 15th May
Well, I returned rather sooner than expected! Although I liked the idea I wasn't happy with the harshness of the image and wanted to find a way of softening it. I returned to the original file and edited in the same way as the first version until I got to Fractalius, when I tried a different filter, with different settings. I must admit that, although I have used Fractalius to a greater or lesser degree on a number of pics, it is very much trial and error. This I am pleased with, it has been printed and will be entered into the club exhibition in September. 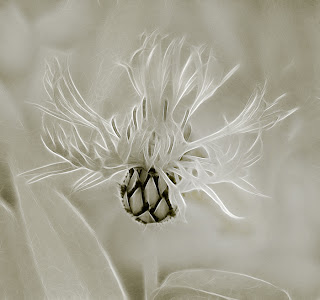 Week Twenty One - 22nd May
Continuing my experimentation with my IR camera I went for a short walk to a local park. Using my fish eye lens I explored all angles in an attempt to get a dramatic, from the ground pic. I enjoyed this because it is a bit different to the normal straight trunk effect usually achieved when looking from the ground up. 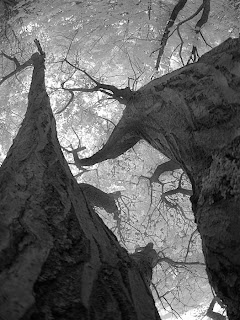 Yesterday I took a few hours out and went to St Albans Cathedral and Abbey. It is a place I have visited many times as it is only 20-30mins drive from my home. Whilst there I often get the chance to listen to some choral music, which I also enjoy. I have always found the people in the Cathedral very welcoming, they don't charge to take photographs and provided you are sensible are happy for you to use a tripod, however I didn't take mine yesterday and regretted it. 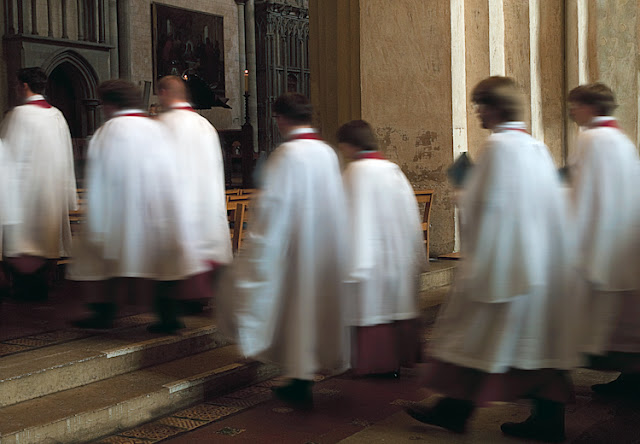 The one time they do not allow photographs to be taken is during the services, whilst I totally understand why, I always feel its a pity that I can't take photographs of the core activity of the Cathedral. I did manage this one taken as the choir entered, they were quite happy for it to be taken and considering it was hand held I was quite pleased with the result. This choir was from Tennessee in the US, they were very good.

During the weekend away referred to in my main post I did have a few moments to try and store up some pics for this year's club competitions. This one was with the 'Worms' Eye View' competition in mind.


I did not have a tripod so capturing a sharp image and keeping the highlights from becoming blown were my main challenges. It has not yet been printed but it may well make it to the final cut...we will see.

I am finding lots of possibilities for my fish eye lens. This is probably a more common image taken with the lens but it was great fun and created peals of laughter from my friends who were looking on, especially from the children when the cow virtually touched the lens.

This is a work in progress. No new pics recently so I am looking at one or two from my weekend away. I like the composition of this one but recognise that it is not yet the finished article. I am particularly enjoying the combination of fish eye and IR photography. I am, however, learning that exposure in camera is very important as it is very difficult to rectify IR mistakes later.


It is a little flat and still needs work, but I am convinced it one worth persevering with. The problem is that when I up the contrast the sky becomes blown, I can feel some layers coming on.

I am pleased I have made it half way through the year with at least one image per week. OK so the original idea of taking one image a week fell by the wayside, but at least the pages show some of the images I have been working on.

This week's offering is no different, a couple of photographs taken a few months ago but only just seeing light of day. All IR images, edited using Fractalius to leave a graphic image. I have some help with this idea from a photographer friend who has generously spent time helping me to edit the middle image.